This amazing treatment  feels great, calms the nervous system, reduces pain, and realigns the body. At the end of a session, you'll probably feel taller and lighter, and like you can move easier.   It teaches the brain new ways for the body to function so that it  "Makes the impossible possible, the possible easy, and the easy elegant."
Moshe Feldenkrais 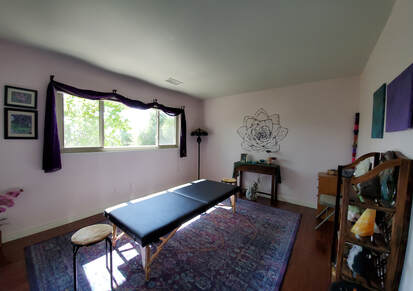 Testimonial 1
"I have had back pain since I was a child. No one, from doctors in the UK to doctors and
chiropractors here, has been able to do anything of consequence about it. After a couple of car
accidents over the years and discovering that my neck had actually fused I resigned myself to
a life of pain.
In addition to my back pain, after a long course of steroids, arthritis developed quickly in my
shoulders, hips and knees. More pain on top of pain. I could barely get in and out of the car.
Then I discovered Diane Curriden and The Anat Baniel Method. Having tried all kinds of
methods and techniques, I was skeptical to say the least. My wife was taking yoga lessons
with Diane and had a couple of sessions with the Anat Baniel Method. She said that it was
remarkable and that I should try it.
I did and became a believer almost immediately. After the first few lessons I was feeling much,
much better. I still had a few pains here and there because now I was able to focus on where
exactly they were. Before I was just generally ‘in pain’. Now, with me being able to pin-point
the areas, Diane would focus a lesson on each individually. The difference after each lesson
was remarkable.
My arthritis continues to develop and I expect with further degeneration I will need future
attention and re-training but so far, after about two or three months, thanks to Diane, I’m
almost 100% pain free most of the time.
I can't recommend the treatment more highly​." Michael from Solvang

Testimonial 2
"Decades of arthritis, sadness, sports, hard work, and car accidents, and twenty home relocations; and related subsequent multiple surgeries on hands, elbows, and feet, (not to mention, almost EVERYONE I EVER LOVED HAS DIED, young and old), led me to do lots of chiropractic and yoga and eating more vegetables.

HOWEVER, still searching to finally sleep deeply, (real healing, restorative sleep, and age gracefully) and FEEL NORMAL, without the constant FLU like feeling of fibromyalgia since I was 38.......at 61 years old, and I do mean feeling OLD!!!....I discovered Anat Baniel Method through my personal trainer/therapist, Diane Curriden, in Solvang, CA.

I pleasantly experienced two of her practice sessions on me, while she was a student, in late June of 2018.  The mild touching and slow moving of legs/arms/head/rib cage and sternum, etcetera....had me "floating,"  deeply sleeping at night, and half the ALL OVER pain, and triple the energy of many, many years.
While, I currently know almost nothing about "WHY" this "THING" appears to be "magic".... I have a child like excitement of, dare I say, dare I dream, WOW, feeling normal.    I do remember normal.... so very long ago.    As I sit here composing this commentary on my two sessions, that amount to about 65 minutes in a week, it sounds like a fairy tale. To say I'm looking forward to more sessions, is an understatement."
Jo Bartek
See more  of Jo's journey by clicking here.

Testimonial 3
"I have had the pleasure of having 3 treatments of the Anat Baniel Method by Diane. Each time I went into the room, I was hunched over my walker and felt exhausted and was eager to find out how Diane's healing hands were going to improve my disposition. I'm more than pleased to tell you how I left the same room... My whole body felt much lighter and easier to move. My legs felt strong enough to hold me up. I was able to walk -- standing straight-up -- taller by about 3-4."     Walking was easier for sometimes 24-48 hours up to 3-4 days.  Swelling in Right Lower Leg was improved for up to 3 days."  Deb Bandel

Testimonial 4
"After nine years of unrelenting effort in working to regain my violin  playing skills following a stroke which left my left side paralyzed,
I  just had a major breakthrough in my vibrato. The movement required in  vibrato had proven to be completely unresponsive to normal practice  methods, and was frustratingly stuck at an unacceptable level. Then  Diane offered an ABM intensive (3 sessions in 5 days). Immediately I  could feel movement in the muscles closest to the humerus, which had been a dead zone and prevented vibrato from being able to happen. With  those muscles now activated, I am 100 % sure that the training of the  vibrato movement will be successful."
​Diane Byington

Testimonial 5
I am completely amazed at how much the Anat Baniel Method sessions that I had with Diane, helped me.  I'd been having pain in my hip for about a year when Diane first introduced me to Anat Baniel Method and almost immediately the pain was gone.  I don't understand how the process works, but it truly does!  I highly recommend these sessions and Diane to anyone who suffers from pain. "  Jenae Johnson

Testimonial 6
"I immediately noticed how much easier I could turn my head while I was driving home and that still seems the same today. (2 days later.)  (There's been a) "release in my neck and shoulders.  Also, my neck isn't crackling anymore when I turn my head."  Natalie Werk

"I showed up for my Wednesday morning yoga session visibly in pain. My right shoulder had bothered me since the previous evening. I was unable to fall asleep before taking an Advil. At the end of my session, I was still hurting to some degree, but I was able to stand much more upright without the slouching shoulder. By the time I went to bed, I had totally forgotten that my shoulder had been hurting. I don't know exactly when and how, but sometime during the day, the pain had vanished. I went to bed, slept, as usual, on my shoulder, woke up the next morning and have had no pain since." GR
​
Testimonial 8
"Didn't think I noticed anything until I went to TRX and yoga the day after my session.  My balance was much better and so was my stamina!  Thank you so much for helping me and would love another session.    I'm telling people about you."    Betsy Hadley